Press Releases
Washington DC- UOSSM condemns, in the strongest possible terms, the killing of seven White Helmets (Syrian Civil Defense) staff In Idlib, Syria.
At approximately 5 a.m. Damascus time, an armed group stormed the center in Sarmin, and shot and killed seven members of the White Helmets.  The killers also stole two cars, phones, and walkie talkies, among other equipment used to save lives, from the center.
The Director of the White Helmets said, “Their work solely focused on saving the lives of civilians, triaging the wounded, and putting out fires.” The White Helmets work was recognized worldwide as they were nominated for the Nobel Peace Prize in 2016. The Netflix Documentary “The White Helmets” won the Oscar for best short documentary.

Among the seven that were killed was Abu Kifah, the hero that was captured on video last year, crying after he realized the baby he saved had survived.

The Syrian Network for Human Rights documented crimes/attacks against medical staff and White Helmets in the first half of 2017, with the total number of victims at 69 in 135 different attacks on operating facilities.

UOSSM staff extend their deepest condolences to the families and loved ones of the victims. UOSSM affirms its full solidarity with the White Helmets, and condemns any crime that targets them or any other medical or relief aid worker. 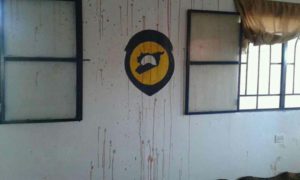